The first year of the PhD is over… I guess! It doesn’t really feel like your second year until the new first-years arrive in September, and work hasn’t suddenly stopped with the end of the semester, unlike in college. If anything, this summer is when I’ll actually make any progress on experimental ideas I’ve been developing since I first e-mailed my advisor two years ago. But enough time has passed that I think I can share some reflections on my first year that can hopefully help someone else starting or considering starting a PhD in biology.

A quick bit of background about Ecology and Evolutionary Biology (EEB) at Princeton to help frame this post, since EEB programs vary hugely across universities:

During my first semester, I spent most of my time as a TA for a huge introductory bio course, read articles for the two graduate-level classes I was taking, attended weekly colloquia by visiting speakers, and read as many articles as I could to develop research ideas. In my second semester, I did a tropical ecology graduate research course in Kenya, analyzed the data and wrote up a presentation, read more articles and two textbooks, performed pilot experiments to get experience working with fish, spent several months writing and revising a protocol for proposed experiments to be approved by animal welfare, and attended the weekly colloquia. (But mainly across both semesters: I spent hours and hours figuring out what experiments to do and how to do them!)

What I thought grad school would be like during college

“Grad school is where you show up at noon, plan some experiments, run them the next day, then analyze the data. A PhD takes 5-7 years because it takes a while to plan the perfect experiment, one that hasn’t been done before and that answers a hole in the literature. During your first year, you do 5-6 experiments and publish at least one of them.”

When you’re doing lab reports during college, it’s almost guaranteed that the Discussion section will say something like “the study would benefit from more data.” We had three hours to do the lab; imagine how good the data would look if we had three weeks, or three months? Then, during your senior thesis, you continually imagine being able to do your research without juggling hours of lectures and homework at the same time. Grad school seemed like a big expanse of time to think about experiments, try them again and again until they’re perfect, and then publish. Any sub-perfect experiments were the fault of the experimenter not being motivated enough.

What I thought grad school would be like during the Fulbright

“Grad school is where you show up at 10am and try to figure out why the pilot experiments didn’t work. A PhD takes 5-7 years because ironing out all the details of an experiment takes weeks of pilot work, running experiments and analyzing the data can take months, and many experimental animals only have certain times of year when you can run experiments on them. During your first year, you spend half the time planning and the other half the time running the experiments and troubleshooting.”

(As some background: I worked at the Max Planck Institute for Ornithology for a year after graduating college, collaborating with a PhD student on a study on sleep in wild birds and doing a pilot experiment on social foraging.) The sleep study required weeks of reading articles and planning, with its pilot taking about a month to perform, analyze the data, and get ideas for improving the final design. Preparation for the experiment took three months, the actual experiment took two weeks, and analyzing the videos took four months. Grad school, it seemed, would be a cycle of preparing for an experiment, performing it (successfully), analyzing the data, and publishing.

Something I didn’t quite grasp during my senior thesis and the beginning of the Fulbright was how much others had helped in making my experiments work out. It’s the difference between trying to find a store in a huge city you’ve never visited versus someone giving you a map and telling you roughly where the store should be. My advisor in college steered my thesis ideas towards a project that would answer a question regardless of what the results were, and my collaborator in Germany was the equivalent of a 4th-year PhD student in the U.S., meaning she’d had a lot of experience with figuring out the right way to do an experiment.

An incredibly common feeling in grad school is “hm… I’m not sure how to do this.” The first reaction is to ask someone else, maybe an older grad student in the lab, or your friend who’s a lot better at R or Matlab than you are. You just don’t know the answer right now, so let’s find it and move on. For our generation especially, Wikipedia and Google make the answers to most of our questions separated by merely seconds from when we decide we want to find out. Grad school, on the other hand, is about constantly being in this zone of wanting to know an answer but not having it. That’s what research is; if we knew the answer, it wouldn’t be research! Research is all about being right at the edge of humanity’s knowledge on a topic.

As frustrating as it can be not knowing how to fit a quadratic curve on a scatterplot in R or who to e-mail for ordering new syringes for the lab, it is very satisfying the next time you have to do it and you know exactly how. And as you read more articles, go to more lectures, and talk with more people, you start seeing the same concepts reappearing… but this time, you understand them a little better.

Do you remember those “If you had a million dollars, how would you spend the money?” essay prompts in high school? One of the biggest hurdles I’ve had in planning experiments in grad school is getting out of this mentality of infinite money and time. You read about experiments where the authors make grandiose claims out of six data points and you vow to never publish something so ridiculous. If you’re going to do science, you’re going to do it right, even if it means fewer publications during your PhD. Your experiments will have at least 30 individuals, each assayed on multiple days to control for between-day variation in behavior, and each individual will be exposed to 5 treatment groups to see the full effect of the variable on behavior.

Those are fantastic intentions, and it’s possible to make it work. But it’s really difficult. If you’re like me in college, “really difficult” sounds like something that applied to people who weren’t you; you’ve faced “really difficult” before and gotten an A in the class. Let me reiterate: it is really freaking hard to do this. 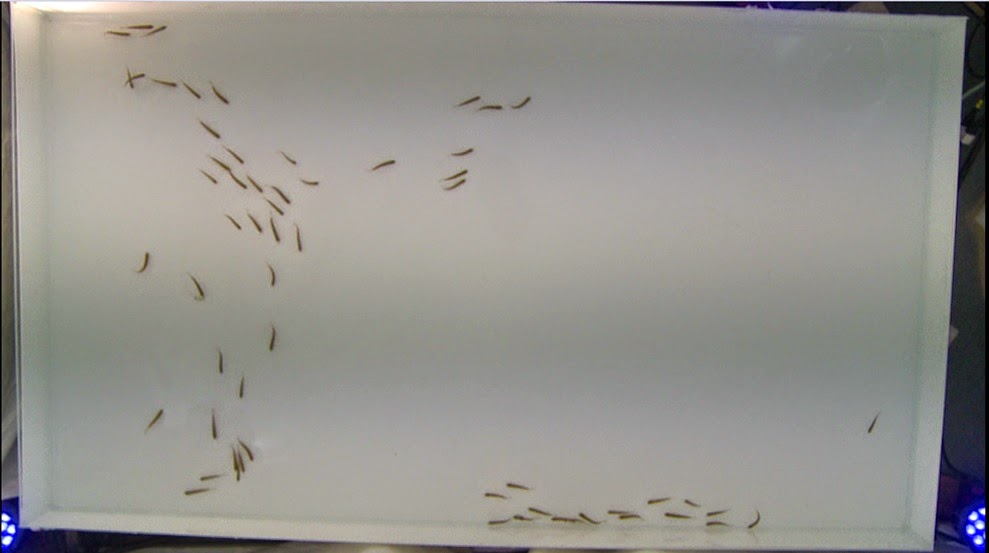 Here’s an example from this week: I’ve started a pilot experiment to figure out how the social environment affects how skittish a fish is in a new physical environment. The idea is to use 8 fish in 3 different groups of 60 fish. Due to poor planning, the videos ended up really dark, and it’s impossible to distinguish who’s who in the video. Not only can I not use the data; if it wasn’t for some quick thinking by marking all tanks where fish had seen the experimental tank, I’d have to abandon any future trials with all fish in the lab because I wouldn’t know their history of exposure to the tank! (In animal behavior research, novelty to an environment is often extremely important.) So even though I’ve been planning these ideas for a few weeks, I nearly messed everything up within the first two days of actually doing anything. It always seems so obvious before you start, and then it never goes how you plan. (Above right is a video still from a trial I can’t use.)

But… that’s just how it goes. You can’t get to the end result without making mistakes. And you can’t make any progress if you don’t try.

You wait (a lot) for clearance to do research

Animal welfare committees are a crucial part of research by instituting ethical requirements for how research should be conducted. They ensure that the research has a bigger point and that your methods are the most humane way to get there (e.g. if mice have to be euthanized, what’s the calmest and least painful way for the animals? If the crickets suddenly start dying during the experiment, what do you do?). If you’re doing fieldwork, you need to get a license for the work; if it’s in another country, you probably need a slew of international approvals as well.

Ensuring that research will be done properly takes a lot of time. Animal welfare committees have panels of both scientists and non-scientists to get a range of perspectives on the ethics of the work, which means extra time is needed to exchange and explain the reasoning for different viewpoints. For fieldwork, a lot of people want government approval for permits or visas, and there are only so many people reading the proposals. The only advice I can give on this is to start early, be patient, and be courteous with your e-mails. The waiting time (on the order of months) can really help refine your ideas for when you actually start.

You start to understand what makes for an interesting scientific question

For the first few months of grad school, I told people I was interested in how group composition affects predator evasion behavior in schools of fish. It took a lot of thinking and discussing with others to refine those ideas into a broader framework with more applicability than one species of fish under one type of predation risk. I’m now learning how to identify experiments that would answer bigger and more central questions in behavioral ecology.

You spend a lot of time thinking in grad school. Your ideas have to stand up to hundreds of hours of mental chewing; the best ideas are the ones that not only hold strong but also generate new ideas the more you learn about them.

Doing research has been challenging but I’ve been really happy so far. It’s really quite amazing to be paid to think about and do experiments asking questions nobody in the world knows the answer to yet. I feel like the incredible amount of time stuck, trying to figure out an impasse, has taught me how to find the answers to things I don’t know. This mentality has given me a lot of confidence to approach things I might have shied away from before because it seemed too difficult (e.g. teaching myself linear algebra, taking a metro or bus in a country where I don’t speak the language, etc.). And most importantly, I constantly feel like I’m gaining a better understanding of how the world works, which only makes me more excited to see where grad school takes me.